This figure illustrates that most of the trips are from/to Brussels, even if a non-negligible part of the trips occur between neighboring cities (unless there is no railroad between them). Based on search data from 20 Dec 2015 to 31 Dec 2015. A line segment links the origin and the destination of the journey. Graph made using QGIS connected to a PostgreSQL database. Base layer: © Mapbox & OpenStreetMap contributors.

Most wanted destinations in Belgium: 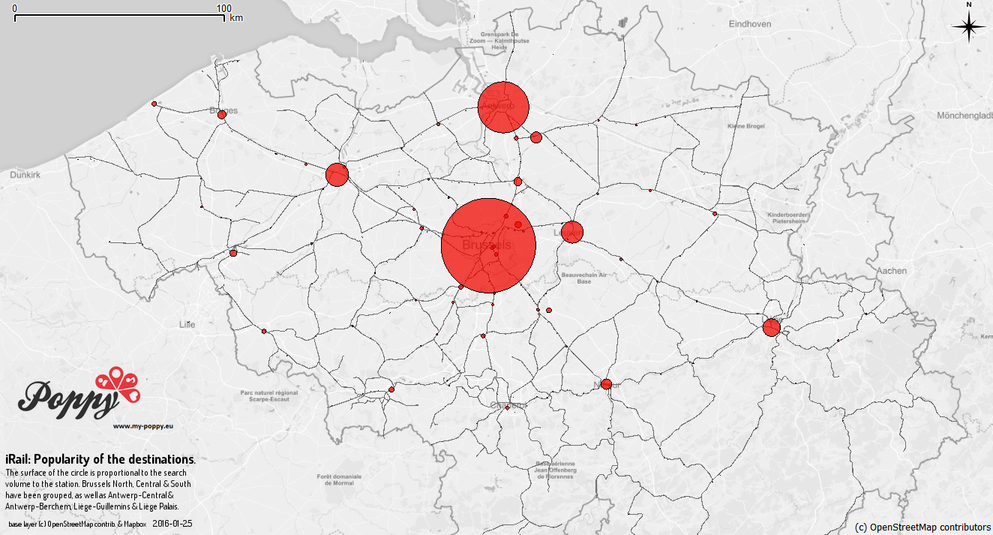 This figure illustrates that most of the trips are from/to Brussels. The stations of the main cities have been grouped (Brussels-North, Central & South, Antwerp-Central, Berchem & South, Liège Guillemins & Palais, Charleroi-South & West. Based on search data from 20 Dec 2015 to 20 Jan 2016. Graph made using QGIS connected to a PostgreSQL database. Base layer: © Mapbox & OpenStreetMap contributors. We are grateful to Pr. Isabelle Thomas (Université Catholique de Louvain, Belgium) for her kind methodological advices. The errors that may remain are our own.

Do iRail queries help to monitor the crowd for large events?

iRail lets you download GTFS data for the whole public transit system in Belgium. In 2015, @pietercolpart released the search logs of iRails as open data. You can read them from api.irail.be/logs. For the maps shown here, we used the stations of origin, destination and the time of the query.